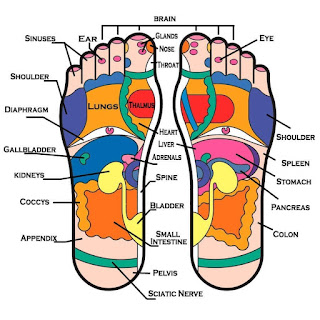 Reflexology is a gentle yet effective complementary therapy for all ages and suitable for most people with very few exceptions and contra-indications. It may be given as a standalone treatment or alongside conventional medicine as part of an integrated care package.

Reflexology is based on the theory that different points on the feet (and hands, face or ears) correspond with different areas of the body. Practitioners work holistically and use their thumbs, fingers or knuckles to stimulate specific reflex points, which is thought to help re-balance the functioning of our organs and systems. The body is supported in maintaining and regaining its natural state of equilibrium.

The evidence describing the positive effects of reflexology is mainly anecdotal, however there is a limited but growing body of research exploring its potential health benefits. Reflexology is suitable for all ages and is often reported to improve people’s quality of life.

The principles behind reflexology date back thousands of years to ancient civilisations such as ancient China and Egypt. Modern reflexology goes back to zone therapy, developed by an American ear nose and throat physician, Dr William Fitzgerald in the early 20th century and he and a colleague (Dr Edwin Bowers) brought reflex zone therapy to the attention of the medical world in 1915. Further down the line Eunice Ingham, a physiotherapist, developed the concept further into foot reflexology as we know it today. Doreen Bayly who had studied with Ingham in the US, brought reflexology to Britain in 1966.

How does it work?

Reflex therapy is underpinned by the theory that everything in the body is inter-connected and that the feet comprise a map of the body. For example, by working particular reflexes on the feet, practitioners can ‘reach into’ any area of the body to stimulate a balancing and healing response. While there are few scientific studies specifically into how reflexology works, research results do point towards communication pathways between the skin, nerves and the organs via the interstitium as a mode of action on the connected areas. It is also known that there are over 7,000 nerve endings in each foot and this may be another mode of interaction between different parts of the body.

Since every person is different, the effects individuals experience from a treatment can vary widely. Because of the way reflexology is thought to work, it may virtually reach and positively influence any part of the body and the functioning of our organs, glands and systems. Health benefits include:

Treatments may also support people living with various other symptoms linked to ill-health.

Find awesome listings near you!